My youngest son just turned 1, and I got most of my birthday party decorations and supplies at the dollar store (and the rest at the dollar spot at Target). I made a video of some of the non-traditional decorations I used for his birthday party in my haul video: Dollar Scores 5. You can watch it right here or subscribe to my YouTube channel and get instant updates whenever I post new videos.

You can find out more about how the birthday party turned out here: “Smiling’s My Favorite” Birthday Party

In case you’re not such a fan of watching videos, here are the highlights:

Streamers are a must-have frugal party supply, so I got them in my party colors: green, yellow, and blue.

I got paper lanterns to hang up instead of balloons that fit in my color scheme. 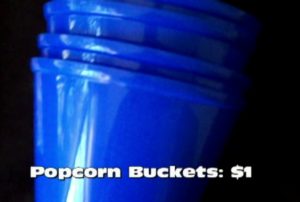 I got shiny blue popcorn buckets with the idea that I could use them to hold food and other treats at the party. 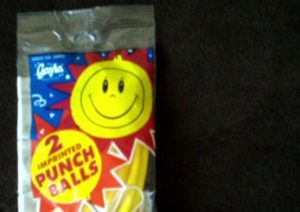 I decided to skip typical balloons altogether this year, so I got the lanterns and these punch balls. They’re yellow, and they have smiles on them (even though I was definitely NOT going to do a lot of smiley face things for the party decor). The punch balls were the best part of the party! I blew up about 14 of them (they’re much bigger than regular party balloons) and just put them out on the floor, and my boys played with them for about an hour. And, it’s been almost a month since the party, and we still have most of them and they get played with regularly.

One of my activity ideas for the “smiling’s my favorite” theme was to have a photo station where people could wear funny hats and get their picture taken. I bought several types of funny hats at the dollar store, including these Tom Sawyer straw hats. Other hats I picked up in this trip: a firefighter hat, knight helmets. I also got a few funny hats and a clown wig at Target’s dollar spot (I think they were $2.50 each, though).

The dollar store’s also a great place to get basic party supplies like paper plates (these weren’t for the party), plastic tablecloths, napkins, paper cups, and utensils.

Check out how the party turned out: Smiling’s My Favorite Party