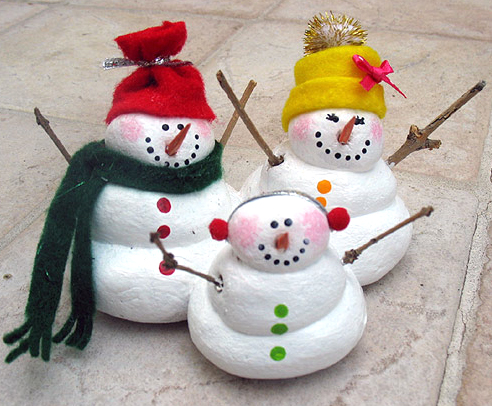 If you’ve never made salt dough you are missing out on lots of fun; that goes for kids and adults alike! The beauty of salt dough is that you don’t have to make a great big batch, simply follow the ratio of 1 part salt, 2 parts flour and 1 part water. If you want to make a big batch use 1 cup of salt, 2 cups of flour and 1 cup of water. You’ll have plenty of dough to make a slew of ornaments, pins, magnets or bowl fillers. If you just want to make a few items, use tablespoons instead of cups! There’s no measurement rule.

For this salt dough snowman family, I’ve given some suggested measurements, but again it’s really up to you!

Preheat oven to 250 F. Mix together, salt, flour, and water until a dough is formed. Knead the dough on a floured surface until the mixture is elastic and smooth. If dough is too sticky, sprinkle with flour, continue to do so until stickiness is gone. Just be careful not to add too much flour, this will dry out the dough and will cause it to crack before you get a chance to bake it.

Salt dough is not edible, however it won’t hurt you or your kids, it just won’t taste very good!

Roll dough in your hands to form different sized balls. Make three snowmen from the balls, then line them up on the cookie sheet. Make sure they are touching each other so that they will be one piece after baking.

Break or cut orange toothpicks in half. Insert toothpick halves, point size out, into the each snowman head for the nose. Insert twigs for arms into each snowman. Be sure to both of these steps BEFORE baking.

Bake for approximately 2 – 2.5 hours. Remove from oven and allow to cool completely. For best results, allow to cool and dry overnight, or for at least 4 hours.

Paint snowmen with white paint. Use the wrong end of the paint brush to dot on colored buttons (I used green on one, red on another, and orange on the third).

Use a smaller paintbrush to repeat this method for adding eyes and mouths with black paint. Alternatively, you can use a black Sharpie marker if you prefer.

Embellish your snow family by fashioning scarves and hats out of scrap pieces of felt and adding a pom pom to the top of the hat. Add on ribbon and make ear muffs out of a small piece of gold ribbon and tiny pom poms. Use photo as a guide. Let dry completely and display.