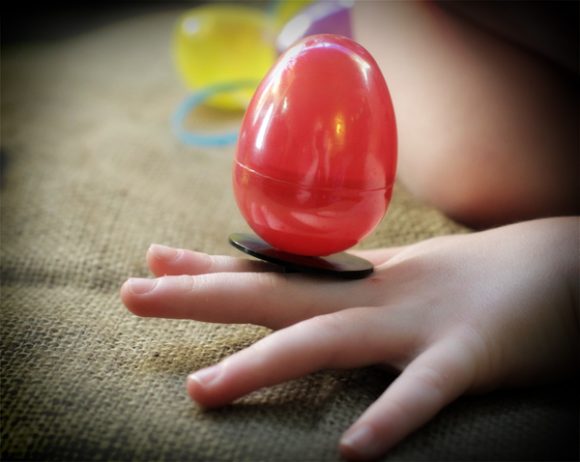 I’m a big fan of jewelry that holds other things (like lockets or locket rings), so I was entertained by the idea of creating an Easter egg ring that opens to reveal a surprise. Of course, a big Easter egg ring like this is completely impractical, but it’s a fun bauble for kids to make and wear around for a day. I found the ring blanks at the dollar store… can you figure out what they started as?

These ring blanks started out as ring pops! I can’t remember how many pops were in a package, but I got at least 4  for $1. I let my kids eat these ring pops, and when they were done, I was like, hmmm… I can dollar store craft those!

Making the hole in the egg is the biggest challenge. The stems on the ring pop blanks are kind of thick (about 1/4″), so you have to poke a generous hole. I had various degrees of success with different tools. I didn’t actually try a drill or a Dremel because I was trying to keep the process simple and attainable for crafters of all levels!

That being said, adults should be the one poking the holes in the eggs. None of the methods are good for kids!

Poking a Hole in a Plastic Egg

Method #1: Heating up a screwdriver with a candle

It didn’t work, BUT it did weaken the end of the egg so that it was easier to poke through with a screw.

Method #2: Screw a screw into the end of the egg

Didn’t work very well (although, when combined with the heated screwdriver previously mentioned, it had the best effect of any method I tried.)

Because the plastic in these eggs is hard, this method wasn’t very good, and also kind of scary.

Verdict: Try a drill or Dremel! I didn’t, but I would love to hear your results.

After you get a hole punched into the end of your egg one way or another, push the post of the ring base through the egg. Depending on the size of your hole, this might be good enough, or you might need to glue a dab of hot glue somewhere to secure the egg.

Fill it up with treats!