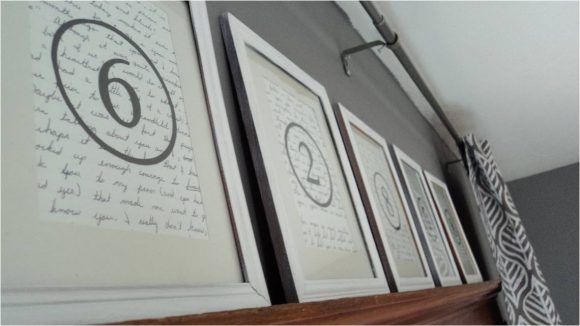 What did you do with your love letters? I think mine are floating around in the atmosphere somewhere because most of them were via email in the 90s. If you know where yours are, and if you are brave enough to display them, sorta, then this idea from Erin at His & Hers is for you! She took dollar store frames and spray-painted them white, then added mattes, love letters, and number cut-outs (their anniversary date) over the top of them. The display is on a shelf over her windows, away from prying eyes. [how to make love letter art]

She used her Cricut to cut out the letters, and if you have a craft cutter, you already know what to do. If you don’t, you can print the letters on paper and then cut it out and paint it (or skip a step and print it on colored paper). The more frames you use, the bigger impact this art will be. I suggest going with five frames or more, like Erin did.