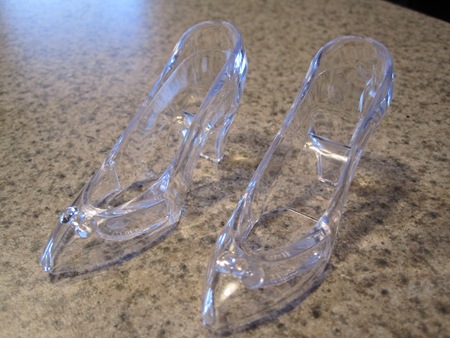 Have you checked the wedding section at Dollar Tree lately? They always have lots of good stuff to craft with. One of our readers, Jennifer, over at the Dollar Store Crafts Facebook page just brought home a load of closeout wedding stuff and wants to know what to make with it:

All right, so my dollar store had some of the wedding stuff discounted 75% off! I knew I could make crafts with them, but I am lacking some ideas. I ended up with the 80 packs of gold rings, the packs of small clear plastic Cinderella shoes and some small plastic swans. Any suggestions? I was thinking of doing a mod podge/glitter combo on the shoes to make them sparkle, but other than that I cant think of anything. Oh and be on the lookout for clearanced wedding stuff! We stopped by another dollar store and they had them 50% off.

So, what to do with:

Go to it, readers!

image: Beckie from Infarrantly Creative (she made Ruby Slippers!)