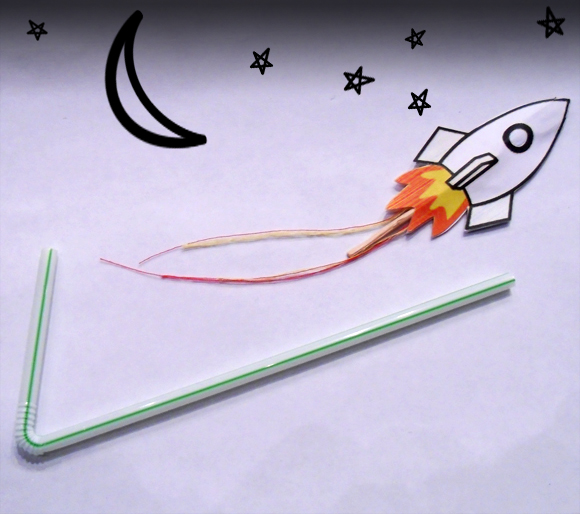 Recently NASA stated that space shuttle Atlantis will be the last of the shuttle program, retiring the entire shuttle fleet to concentrate on sending probes further out to asteroids and Mars. But that doesn’t mean that all rockets need to be grounded, you can make your own!  Using paper cut-outs, toothpicks and bendy straws you can make your own flying rockets for next to nothing! 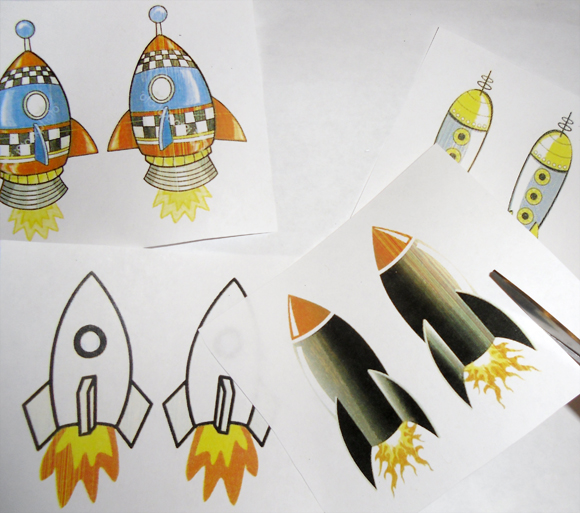 Start by surfing the web and finding  images of the rockets you want to make. I typed in ‘rocket’ into the search bar then filtered through the images and was rewarded with plenty of many options.

Choose your favourites and copy them into a photo or paint editing program, your computer probably has something that came preloaded. If you chose a symmetrical image you need only make two copies of each rocket, one for each side. If your rocket image is asymetric, you’ll need to make a mirror copy of the image. Depending on the computer program you’re using there are a variety of methods to making a mirror copy.

If you’re unable to use a photo editing suite, don’t worry, I got you covered.

On the righ-hand side of this page is the version I used to make this project. The images have all been mirrored and will match up correctly when cut out. Feel free to right click the image and ‘save as’ to your desktop. Then, open it in any viewing software (double-click the image) and then print. Scale the image to print on a standard A4 (8.5″X11″) sheet.

Print your rockets out on regular printer paper and then cut out each rocket shape.

Next, cut different lengths of red, yellow and orange thread. The thread will be the rocket exhaust, 4″ (10cm) or less for each is fine.

You’re now ready to assemble a few rockets and launch them!

Place the toothpick end in the short end of the bendy straw, then take a deep breath and blow into the long end of the straw. The rocket will fly out then end with a blazing plume of booster engines blasting out the back!  Ok, well maybe you’ll have to use your imagination.

Make sure not to point them at any people or pets, and have fun!