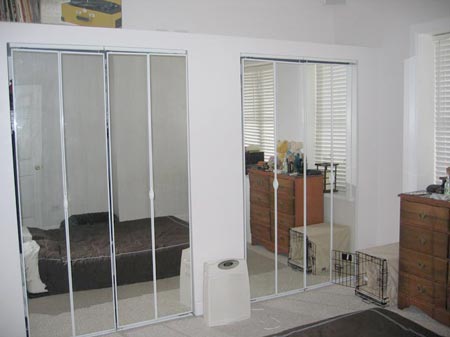 Everyone put your heads together! Reader Sue has a big question for us:

I recently was given a set of mirrored bifold closet doors. Does anyone know how I could upcycle these into something cool?? I really don’t want to break the mirrors to use on other crafts, but I am at a loss for an idea. They have an ugly silver handle on them. I need people to keep in mind that I just have one door (two mirrored panels), not both, and it is very heavy.  Also, there is a small crack on the mirror of one of the doors… maybe something someone could think of a way to be creative and cover??  I so want to make something from these, I sure hope somebody has some sort of inspiration. Any suggestions are appreciated. Thanks!!