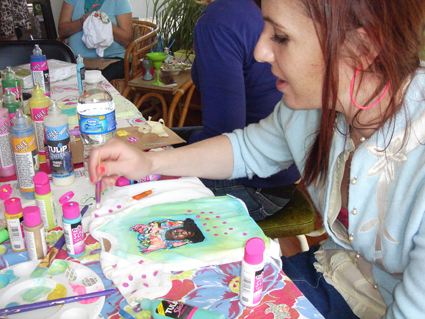 For my first baby shower, back in 2006, I was adamant about one thing: no cheesy baby shower games! Instead, I insisted that my friends get a little crafty. Our only “activity” was to embroider washcloths for the new baby (who became Lewis, my now 5 year-old!). I love baby shower ideas that are creative and unique. Jennifer Perkins of Naughty Secretary Club had a DIY onesie baby shower before her daughter was born – I think that’s a perfect way to celebrate at a baby shower. What are your favorite baby shower themes, games, and ideas? Share in the comments!

Becoming a mother has been one of the craziest, and most important things that has ever happened to me. Today I’m sharing an essay about the most difficult moment of my first son’s birth for ABC News and the UN Foundation’s Million Moms Challenge. Here’s a sneak peek at the essay:

But the worst moments of my pregnancy were when I was close to giving birth. I was in the “pushing” stage. There was a monitor attached to my son’s scalp so they could make sure his heart kept beating during the labor process. As I would push, his heartbeat would stop. As soon as the doctor noticed that the baby’s heart kept stopping, she told me that they had no other recommendation but to rush me to surgery and give me a c-section. The umbilical cord was wrapped around my son’s neck.