Googly eyes… they’re not just for kids’ crafts anymore! Lately, the humble googly eye has seen some high fashion times. The Blonds featured a knockout googly eyed jumper in their Fall 2011 show. I will give a $50 Dollar Tree gift card to the first person who makes a googly eye jumper and sends me the photo!! Christian Louboutin designed the “Déjà Vu” heels – black slingbacks that are covered in googly eyes, and my friend Kristin over at Glitter ‘N Glue (who has been ROCKING at the DIY fashion tutorials lately), made a pair of lookalike Louboutins featuring wiggle eyes. [diy googly eye slingbacks] 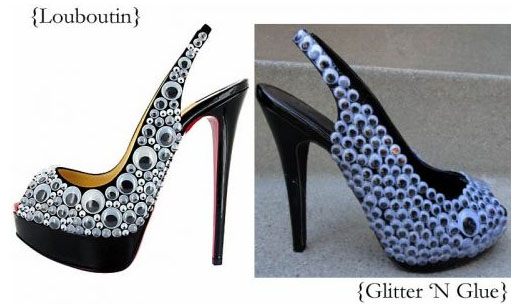 This is just one of Kristin’s many recent Halloween-inspired fashion-forward projects, but I chose to feature them because I am such a fan of googly eyes! If this project doesn’t appeal to you, perhaps a pair of kids’ shoes covered with googly eyes would be more fun! Or maybe a headband covered in googly eyes, just as a nod to the fashion trend. Or maybe you will enjoy these Googly Eye Nails by Robin Moses Nail Art. 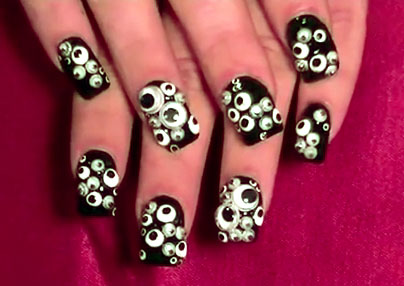