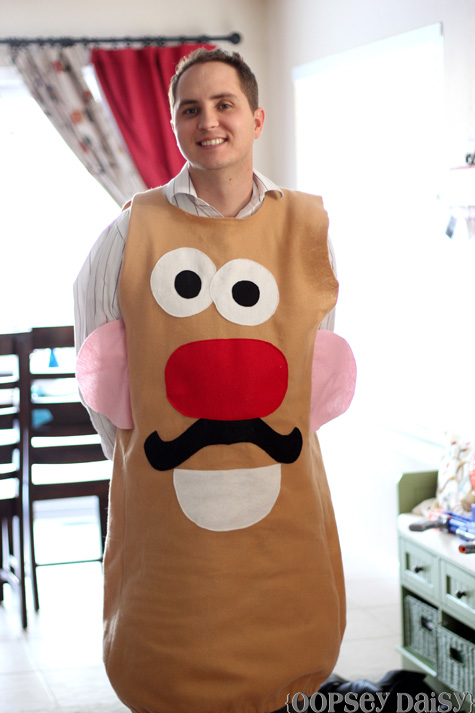 Some Halloween costumes are more universal than others.  For instance, my most recent costume consisted of a bath robe, a towel, and a book with “Don’t Panic” in large, friendly letters on the cover.  Get it?  Most people didn’t; despite seeing hundreds of people that day, there were only two (yes, two) geeky oddballs who got a good laugh out of it.  If you want to avoid the awkward “what-are-you-supposed-to-be” guessing game, try something a little less subtle, like this Mr. Potato Head costume from Alison at Oopsey Daisy, posted at The Train to Crazy as part of a fabulous handmade costume series.  This costume is for her husband, and she made a matching Mrs. Potato Head for herself.  They go with a collection of group outfits on a Toy Story theme.  How fun!  She appliqued the facial features to the costumes, but I’m also keen on the idea of using velcro to attach them, adding the same interactive element that makes the toy so much fun!  [how to make a Mr. Potato Head costume]