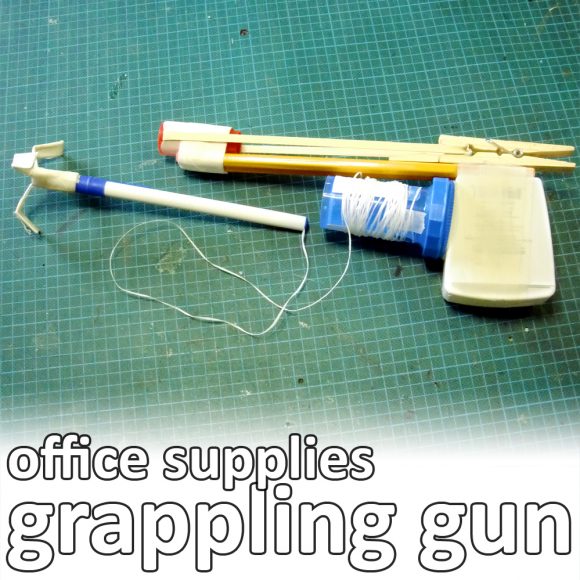 Ever notice how secret agents and spies get all the cool gear? Well, now you can too! Make your own mini grappling hook out of office and household supplies, then let let loose on a top secret mission from Her Majesty’s Secret Service.

This grappling hook design was built from the new book Mini Weapons of Mass Destruction 2 (Chicago Review Press) by John Austin*. This book has over 30 mini weapons and gadgets which can all easily be built with office or household supplies, most of which I had on hand already! I chose to build a personal favourite, the grappling gun.

* I am not affiliated in any way with the Author or Publisher. The content of this book lends itself to Dollar Store items and I thought it would be suitable for sharing here.

Grappling Hooks
To make the grappling hook, start by straightening out 3 standard paperclips. Then, half each paperclip and wrap in masking tape. Using pliers, bend each wrapped paperclip into a hook-shape, refer to the picture for bend locations and degree.After all 3 paperclips are bend into hooks tape then to the ballpoint pen cap to secure them.

Launch Barrel:
The launch barrel is made from the cap of a large marker. Ensure that the cap you use is a larger diameter than the ballpoint pen. Create an opening in the closed end of the marker cap by either using a wide bore drill bit or simply cutting the end off the cap. Use caution as this part can be tricky and fingers can get hurt if you’re not careful.

Using hot glue, stick a clothespin on top of the two pencils over the floss container. This clothespin will act as the trigger.

Finally, add the launch barrel previously assembled on top the taped-down pencils, on the opposite end from the handle with the rubber band draw facing the clothespin.

I managed to get mine to fire about 6m (20′) after a little tweaking of the rubber band. Substituting materials may even yield more impressive results. Make sure you point this away from people, pets, plants, or anything breakable.