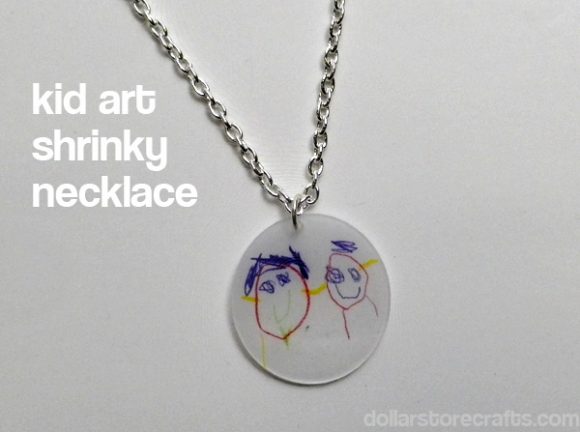 Anyone can give a generic Mother’s Day gift, but only a child can draw a special artwork that will become a keepsake that any mother or grandmother would love. I love making Shrinky Dink projects with my kids because everything is ten times cuter once it’s shrunk down. This year, I volunteered to help my son’s preschool class make special kid art pendants for the preschoolers to give to their moms as gifts for Mother’s Day. This photo here is the one my four year-old son drew – it’s me and him (and we’re holding hands). Awww! 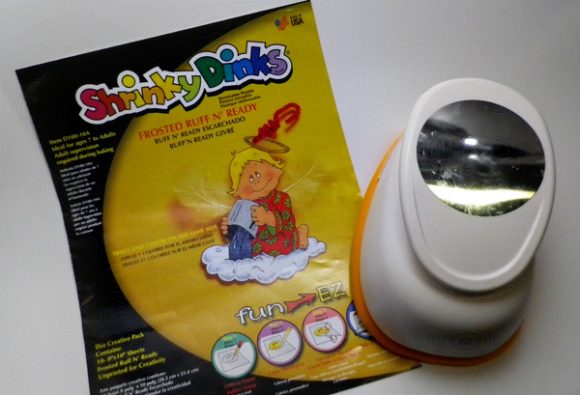 You can find everything you need for this project at Michaels craft store, but if you are on a budget you can cut some corners. Instead of the Shrinky Dink sheets, you can use #6 clear plastic containers (like the ones used for takeout). You can trace a small cereal bowl to make the circle, and then cut it out with scissors instead of using the large round punch.

1. Punch or cut 3.5″ circles out of a sheet of Shrinky Dink Rough & Ready plastic. I was able to punch five circles from each 8×10″ sheet.

2. With a regular hole punch, punch a single hole near the edge of the circle (this will be the hole for the jump ring after you shrink the circle). Alternately, you can wait until the child has colored the circle to punch the small hole. I do it first because I know I will forget otherwise!

3. Let the child color on the rough side with colored pencils.

While working with the preschool class, I explained to each child what we were doing (“We’re coloring on this plastic, and later I will cook it in my oven and shrink it down. It will be a gift for your mom! We’re making it into a necklace for her!”), and gave some ideas of what they could draw, like a picture of the child with her mom, or flowers, etc. I didn’t push the children to draw anything specific, though. Preschoolers are interesting because depending on the age, they might just scribble or they might be able to draw figures and possibly even write their name or “mom.” It doesn’t really matter what they draw though – it will come out cute in the end!

4. Heat your oven to 325 F. Put a sheet of paper on your baking sheet, and shrink the discs according to package directions. It should take about two minutes. The shrinkies will curl up and wiggle around, and finally settle down to a flattened, shrunken state. They shrink to approximately a third of their original size, and nine times the thickness. The final pendant will be about an inch across.

5. Remove from the oven and allow to cool. If needed, flatten the pendant with a piece of paper and your oven mitt. (You can do this for the first 15 seconds they are out of the oven, and then they will harden.) Once they’ve cooled for about a minute, remove the discs from the paper.

Put the Necklace Together:

I like to buy 18″ readymade necklaces because they are so easy to use, and I don’t have to add any finishing features (like clasps, etc.) to them because they are already done! Just a time-saving step. I assembled the whole preschool class’s necklaces together in less than an hour. 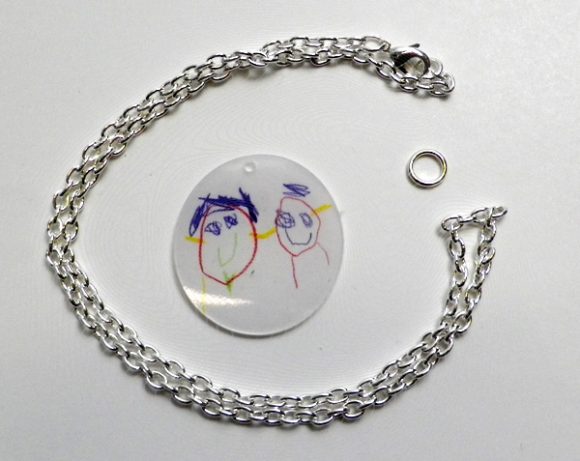 1. Gather the Shrinky pendant, the necklace, a jump ring, and a pair (or two) of needle-nosed pliers.

2. Open the jump ring. Don’t pull the sides straight apart from each other, swivel them side to side. (Thanks for that terminology, Mich L. in LA!) I use two pairs of needle-nosed pliers to do this job, but you might even be able to do it with your fingers, depending on how stiff your jump ring is.

3. Slide the chain into the open jump ring. Then swivel the jump ring closed.

Nitpicky Notes: I prefer the clasp mechanism to be on the right side of the necklace, so I make sure the chain is lined up correctly so that the front of the necklace faces the right way when the clasp is on the right. This is because I’m right-handed! Also, I always prefer lobster clasps because I find them easier to work than some of the other types of clasps. 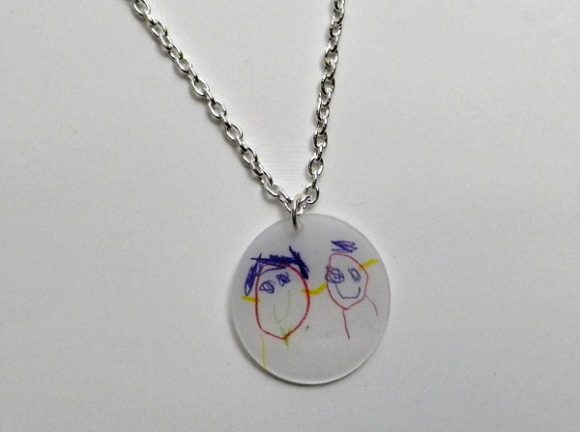 Such a happy necklace! We actually made necklaces like these for the boys’ teachers for Christmas, and they said they were the best gifts they got. I have even seen one teacher wearing her necklace at school, so I know she really liked it. 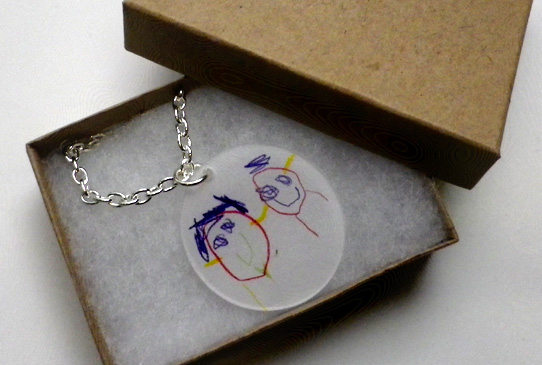 We’re packaging the necklaces in small jewelry boxes just to make them look really swanky. I’m going to go back early next week to let the kids decorate the boxes. Awww, I will be so surprised when I open this gift box up on Mother’s Day! Ha ha!

I love making jewelry! These are so pretty and simple, but I wanted to keep them really neutral so they would be more likely to fit with each preschool mother’s style.