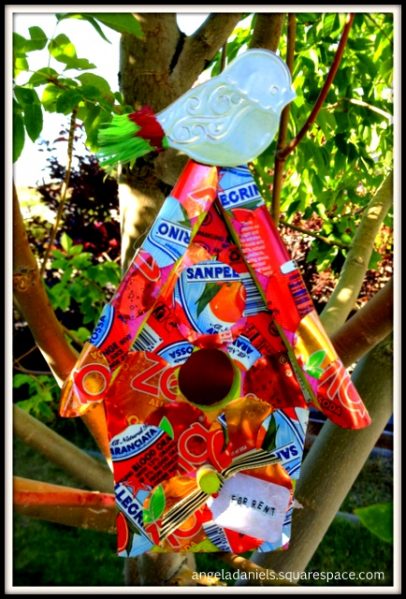 Giving herself just one hour and the contents of her junk drawer, Angela Daniels (aka Guilty Crafter) put together this colorful upcycled birdhouse that is covered with die-cut soda cans. Curious about Angela’s constraints? She is crafting along with the Craft Wars Pop Craft challenges each week. [recycled soda can birdhouse]

Note: Angela used a round punch, but if you are re-creating this project and you don’t have a round punch, just cut strips from the soda can with tin snips. Be careful, the edges will be sharp.

Angela will show up as a contestant on Craft Wars later in the season — I can’t wait to see her episode. Some of her fellow “Craft Wars Vets” are also crafting along with the Pop Craft Challenges. Check out these other bird houses: