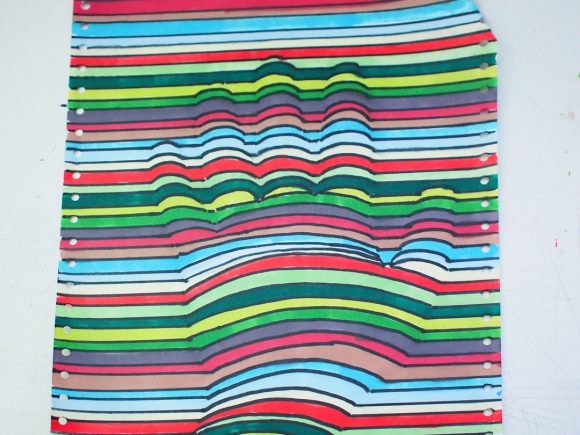 Here’s a fun art activity using standard office supplies. I used to make these when I was in school, and now make them when I’m on boring conference calls.

This project is easy and only takes about 30 minutes to produce some fun results. For those that want more of a challenge you can increase the frequency of horizontal bars and make a more detailed and colourful version.

Start by tracing your hand onto a sheet of paper using a pencil. With a straight edge, draw horizontal lines up the length of the page in with a black permanent marker making sure to omit lines where your hand was placed.

Next, use a pencil to trace arcing lines where your hand trace is, linking the horizontal line segments together. Where it gets tricky is where arcs overlap with horizontal line segments above the segment the arc originated from, like where the thumb or fingers meet the palm of the hand. Spending the time to trace out the arcs in pencil before committing to marker pays off.
When you’re ready, trace over the pencil arcs with black permanent marker.

After all arcs are completed it’s time to colour. The markers I used were chisel tipped, which made filling in large areas much easier, but any fat tipped marker will work. I used loads of colours, roughly grouping similar shades together. The colour combination is up to you, and will look great with 3 colours as it does with 10.

Here’s some other versions I’ve made:

There’s no limit to the combinations of colour and detail you can add to make this art project *pop*.

Experiment and have fun!