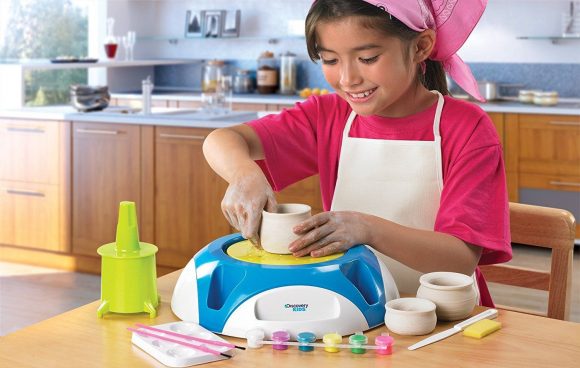 After reading many reviews of many different brands of toy pottery wheels, I learned some tips for successfully using them. They are simple to use, but there are also some common pitfalls that many reviewers complain about. Over in my article for eBay*, I’ve written down my Tips for Using Kids Pottery Wheels, so check them out! (*I wrote that article as a part of a paid collaboration with eBay.)

Artful Parent recommends the Faber-Castell Do Art Pottery Studio, and it also has the best reviews on Amazon. The only thing that I notice about it that I potentially don’t like is that it is only battery-operated and doesn’t include an AC adapter for plugging in the pottery wheel. I would prefer to plug my wheel in, instead of having to use up batteries and then hunt around for (or buy additional) batteries when they inevitably run out.

I’m looking forward to trying out a toy pottery wheel. How about you? Do you have any experience with these?