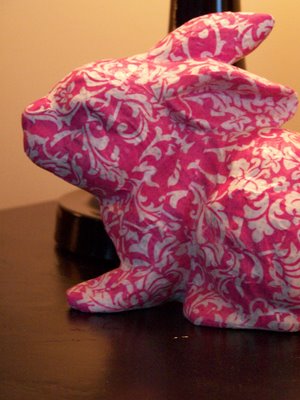 I have a confession to make. I have never in my life decoupaged. I remember my childhood in the 80s, and seeing a lot of leftover 70s decoupaged crafts (particularly in the form of plaques hanging on walls), and just never really getting the whole decoupage thing. I have a similar hangup with magazine and photo collages. But I digress. Anyway, another confession. I have YET to actually own any Mod Podge. Oh, I’ve picked it up. I might have even put it in my shopping cart for a short ride, but I have never actually purchased any OR used it. I know it’s super useful, and a lot of the crafts featured on this site use Mod Podge, but I have just never been wowed by a crafty idea to the point of actually buying the stuff.

This project by A Soft Place to Land might just change all that! Kimba decoupaged a ceramic bunny and a dollar store birdie with pretty patterned paper, and the effect is really cool. (Sidenote: Kimba has admitted to being Mod Podge challenged!) I really like the pop that the patterned paper gives the bunny. The dollar store (and thrift store) usually has a large selection of ceramic figurines (and vases, and dishes, etc.) that would greatly benefit from a treatment like this. (I also LOVE the idea of just painting ceramics a bright color.) You can use the technique on all kinds of objects, so you don’t have to go hunting for a bunny to cover. Just use something you like the shape of. [click here for project info] [via]

And in case you haven’t used Mod Podge, here’s some tips and tricks from Altered Obsession.