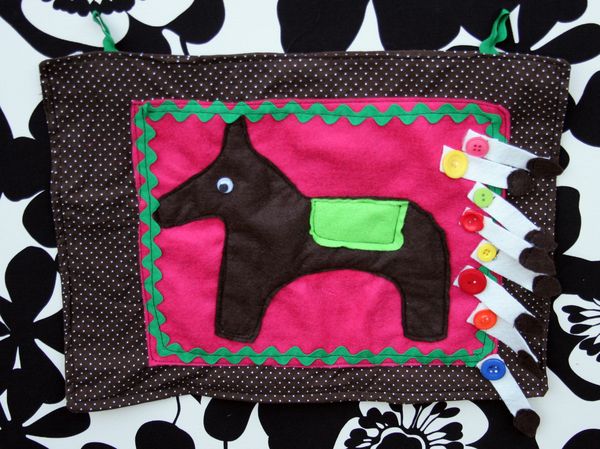 Here’s a quick and easy handmade version of the classic children’s birthday party game, Pin the Tail on the Donkey. Instead of buying a disposable paper game at the store, why not make one that you can use for every birthday party? It’s cute, colorful, and your kids will love the tradition of playing the game at their parties over the years.

My mom asked me to bring Pin the Tail on the Donkey for my sister’s birthday party (she’s a grownup, but my two sons would be there and we were kind of doing an outdoor carnival theme for the party). The party was in six hours from the time I got the request, and my mom envisioned me making a paper version of the game. Well, I didn’t have any paper suitable for the project, and so I looked in my stash for other potential materials and whipped up a quick project. It took less than an hour.

I found a full piece of hot pink felt, a partial piece of dark brown felt, and some scraps of ivory and bright green felt. I also found this brown dotted fabric, ric rack, and buttons. I really wanted to use a placemat for the background, but I liked the brown dot fabric more than the one or two placemats I have in my dollar store crafting stash. To make this project SUPER quick, use a readymade placemat for the background fabric. It should take you about twenty minutes if you do that!

I used recycled disposable diaper tabs for the backs of the tails  (did you know diaper tabs are like space age Velcro material now? They are awesome crafting material, and work like the “sticky” side of Velcro.) Diaper tabs stick well on the felt used to make the game. Alternately, you can use the sticky side of real Velcro.

Total: For me, FREE 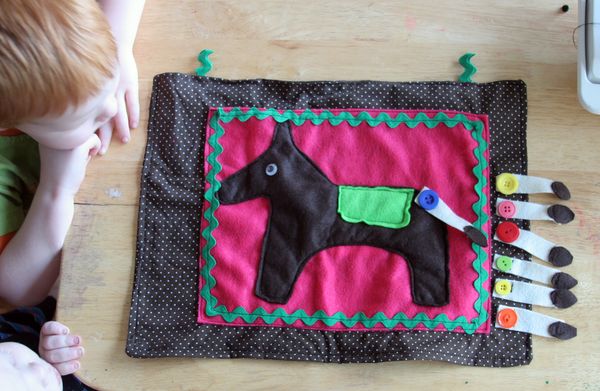 I drew a simple “donkey” shape with chalk (from a dollar store chalkboard) on the brown felt. Okay, the donkey looks more like a Swedish Dala horse, but I think it’s cute. I cut out the donkey and sewed it to the hot pink felt and added the green saddle. I then glued on a googly eye because my three year-old asked me “but where’s his FACE??”

I sewed the ric rack around the edge of the pink felt square.

If you use a placemat: Sew the felt square to the placemat. Add ribbon or ric rack loops to the top of the placemat. 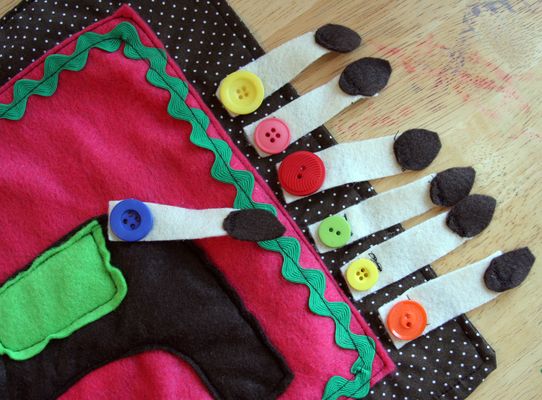 For the tails: I cut the diaper tabs into quarters, then sewed them along an edge of ivory-colored felt. I cut out eight tails, and sewed on a brown teardrop shape at the end of the tail. I glued on different-colored buttons at the top of each tail because I thought it was cute, and also because then people can keep track of which tail is theirs when they’re playing the game.

To Play the Game:

In the unlikely event that you’re unfamiliar with Pin the Tail on the Donkey, it’s a traditional birthday game (in the US – not sure about other countries!). The game is hung on the wall. The player is blindfolded and then given a tail. The player is spun around three times to get them a bit dizzy, and then pointed toward the game. They hang their tail on the donkey, trying to get it near the right spot. The player who is closest to getting the tail on the target is the winner.

I made this Pin the Tail on the Donkey game for Craft a Day September, Day 2.