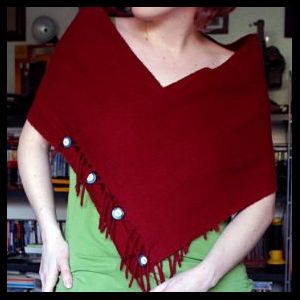 Thanks to my friend Lee, one of my top five most inspirational crafty peeps, who wrote this awesome tutorial, as well as previous scarf-related tutorials No-Sew Buttoned Scarflet and Fringed Scarflet Cowl. You don’t have to do any sewing (well, you do need to sew buttons on with a needle and thread, but anyone can do that — no experience required!) Thanks a lot, Lee, for sharing your awesome ideas with us! – Heather

Pick up a wide, fringed scarf at the dollar store, and with some quick modifications, you can transform it into a cozy shawl to keep your you warm and toasty. Don’t worry, for this project, there’s no cutting involved and no machine sewing. And if you’re the undecided type of crafter, you can change your mind after this one is done; to return this scarf to normal scarf mode,  snip the buttons off, untie some knots, and return your scarf to its original glory.

This project will work best with a wider scarf—mine is about 1 foot wide by about 5 feet long. It’s basically just a much larger version of the first scarf tutorial I wrote (see that tutorial for more info with photos on how to construct it), with the whole scarf overlapping on itself like that instead of the halved scarf.

To make it, start at one end, tying the end fringe strands from each scarf end to each other, then work your way up, fastening the two ends of your scarf together. Tie the fringe of one end of your scarf to the fringe on the other side, one knot at a time. You should now have a tube, which you’ll flatten out and treat as one piece of fabric, with the fringe on one end.

Next, turn some of that fringe into your buttonholes. Decide how many buttons you want to use, and count the fringe on your scarf. Figure out how to evenly space the buttonholes, and tie pairs of fringe to each other again, but with the new knots at the tips. Each buttonhole will be a pair of fringe strands, one from each end of the scarf, tied together once at the base and again at the tips, forming a loop.

It should be overlapping so that the two fringed edges are at a 90-degree angle, each lined up parallel to the side edge from the other side. There are two ways you can wear this style: You can wear it as a kind of shawl/poncho to keep your shoulders warm…

…Or you can pull it up from the back, twist it behind your neck, and pull it down over your head to create a cozy cowl with cute buttony features.