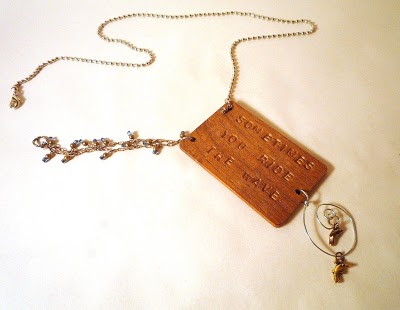 Mich L. in LA came up with yet another great idea from her Super Secret Stash stuff! She took the item in the stash that least inspired her and challenged herself to make something from it. Instead of using the actual item, she decided to take the words from the item and use them to make a reversible pendant. You really have to see her post to get this project, but I’ll just tell you that it has an optimistic and a pessimistic side to it, and also that I love the concept of this flippable pendant! [click here to see what I’m talking about!]

I really like the idea of making a pendant that can be worn one way one day, and then flipped if you are in a different mood another day. Kind of like an updated take on a mood ring! Be inspired by this concept to make the back of your items just as pretty as the front (but different), and your creations will become twice as interesting!

p.s. Sorry about the weird price estimate – there’s no real way to recreate this exactly!