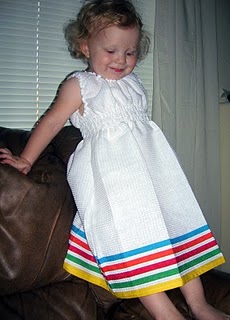 Have you seen these ribbony dishtowels at Dollar Tree? They really are as cute in person as they look in the picture. Reader Ash at Bandy Canyon made this adorable dress for her toddler out of just TWO dish towels! She doesn’t provide a pattern, but I have listed some tutorials below for you. [see Ash’s dress here]