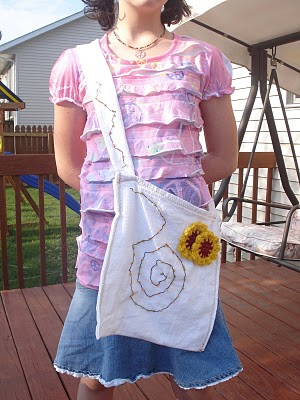 Reports are still coming in from around the country: the ten secret stashbusters from our April Stash Bust worked hard to bust their super secret packages. April was such a successful (and super busy) month for me, that I had recover before I could finish writing about the projects. And guess what — there are still a few more projects to write ab0ut!

Speaking of April Stash Bust, I never announced who the winner was: it was Nicole Maki from Made By Nicole for her stashbusted cloth napkins. She won a ton of cool prizes*.

Now, on to the super secret stashbusting projects:

Lee-Ann from Flicted Sewing Room received the yellow stash in the Super Secret Stash project, and she posted her first project: a Summer Satchel she made from a dollar store flour sack towel. (See photo at the top of the post). 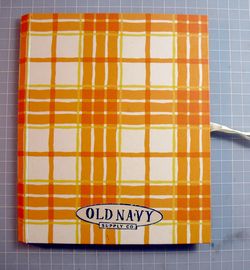 Terry S. got the orange package, and started with this old stationery folder (I seriously had this for more than ten years). She transformed it into: 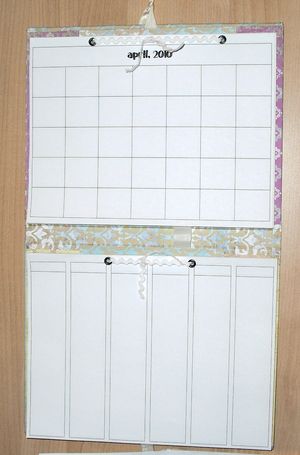 A wall calendar! She said:

i absolutely loved the old navy stationary/paper holder and immediately knew i wanted to make something with it. i needed a calendar for my craft room because i am really bad at keeping track of dates (as proven by my tardiness on this project!), so i turned it into a wall calendar that i can also take with me when needed.  i took out the inside pockets and covered the whole thing with pattered paper and added a ribbon pen holder in the middle. as much as i liked the pattern, i thought part of the project should be to totally recreate it.

since it came with ribbons attached on the sides, i kept these and use them to hang the calendar right by the side of my desk  i customized it with 2 copies of each month, just in case, and added a ribbon loop to hold a pen in the middle. i wanted the calendar to be pretty and also reusable, soi designed it so i can change the months and weekly lists out when needed. for traveling, it can be folded in half like a notebook with the ribbons tied together.

since i liked the original pattern on the folder i saved the inside folders and used them as the covers for a small business card book.

Cynthia (aka, Ms. Pink) has posted several projects, and here’s her newest one: an embellished onesie: 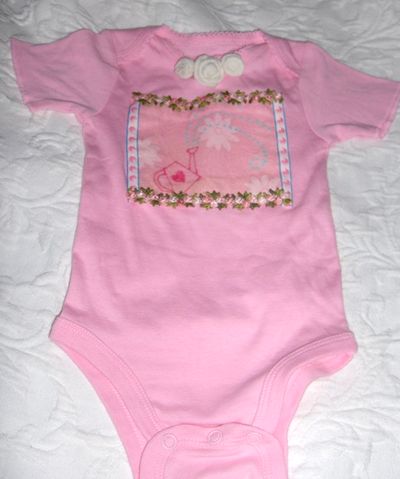 And, Julie from Floribunda Quilts made some ATCs with her stash: 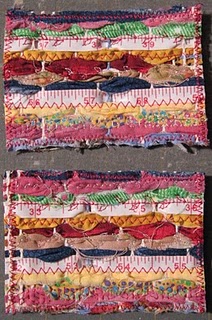