By now, you have probably heard of Knock-Off Wood and Ana White, but if not, let me introduce you to this great resource for frugal DIYers like you and me. The site provides free plans for building quality furniture that looks like furniture you can find in designer stores like Pottery Barn and West Elm. I discovered the site in February, and a week later, we built a king-sized storage bed! Amazing!

I think you will be interested in the site because I know you love great ideas, good design, and making your house a home, all on a budget. If you can dollar store craft, then you can build Knock Off Wood style! One of the things I like most about the site is that Ana White, the author of the blog, demystifies the process of building and is really encouraging toward beginners. Even if you have never picked up a hammer or power tool in your life, you will feel like you can do it after reading a few of the blog posts and reader testimonials.

Ana let me ask her a couple questions to share with you. I’ll share the interview on the next page, but first let me tell you about my storage bed and the very cheap (but cute) storage containers I made to go in it. 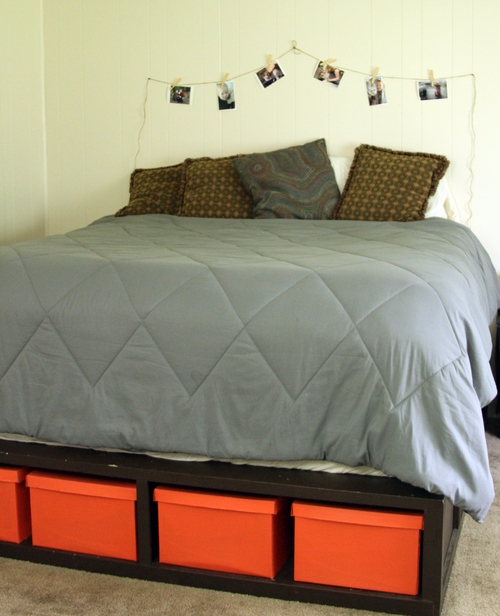 The Bed: Here’s the bed. It’s a king-sized storage bed that I painted dark brown. (Sidenote: you will notice that it’s REALLY tall because we use the boxspring as well as the mattress. I am so thankful for the lip on the end of the bed so I can get on the bed!! Otherwise, I’d also have to build a staircase too!). It’s been several months since we built it, so I don’t really have any major details to share because I have mommy brain and I can’t remember them. I believe we spent about $150, including paint and a countersink and drill bits. It took about 3-4 hours to build (not including about 2 hours in the home improvement store to get the lumber cut!) and several coats of paint. I think I should take a page out of some of other other builders’ books and go ahead and distress it in advance since I have 3 small kids!

Storage: I was stumped about how to put storage under the bed without spending as much as we spent on the bed. Large baskets were about $20 apiece at the cheapest, and the bed has space for 12 baskets. Hmm, 12 x $20 = too much. So, I hit upon a great idea. I bought a pack of 10 bankers boxes at Costco for less than $15, as well a can of paint.

I like the banker’s boxes because they are cheap, sturdy, easy to replace if necessary, easy to paint (and repaint, if you change color schemes), and streamlined looking. A painted banker’s box would also be easy to embellish. You could Mod Podge pretty paper to them, add fabric, ribbon, flowers, or whatever, according to your style. Oh, and they provide a ton of storage!

Prime the banker’s boxes. This is optional, but recommended. You want to cover over any words or logos on the boxes so they don’t show through the paint.

Paint the boxes with latex paint in your chosen color. Give it a second or third coat, if necessary.

I assembled the boxes before I painted them, but after I did it, it occurred to me that it would be a lot quicker and easier to paint the boxes while they’re still flat. 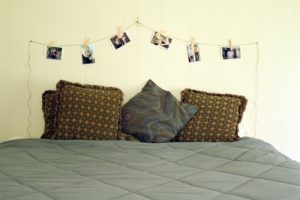 Side project: if you want to make a “headboard” like mine, put three nails in the wall, tie dollar store jute string to them for a virtual headboard, and hang photos from the jute string with clothespins! Total cost: about $2 if you don’t already have everything on hand.

Now, on to the interview with Ana.