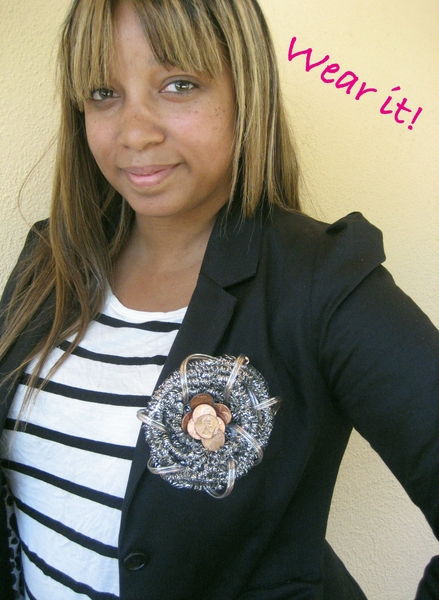 I want to welcome Kristen Turner of Be Vainglorious or DIY Trying and Threadbanger Style to Dollar Store Crafts today! She’s a wardrobe stylist and fashion blogger who loves to DIY her favorite fashion trends and accessories. She made a special trip to the dollar store just for us, and created a fashion-inspired coin brooch. She was inspired by Chanel’s camellia brooches, plus a very special coin.[follow Kristen on Twitter] 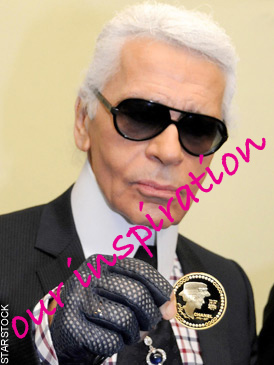 Her inspiration was this commemorative Chanel coin designed by Karl Lagerfeld. When it was released, the gold version cost €5,900 and there were only 99 of them in existence. You could pick up one of the 11,900 of the silver coins for a mere €45 (about $58), but the coins were released over a year ago, so you’ll probably have a hard time finding one. I think we can all agree that $58 for a coin is a little steep for our fashion budgets. Lucky for us, Kristin came to our rescue with a frugal yet fashionable substitute: the penny! 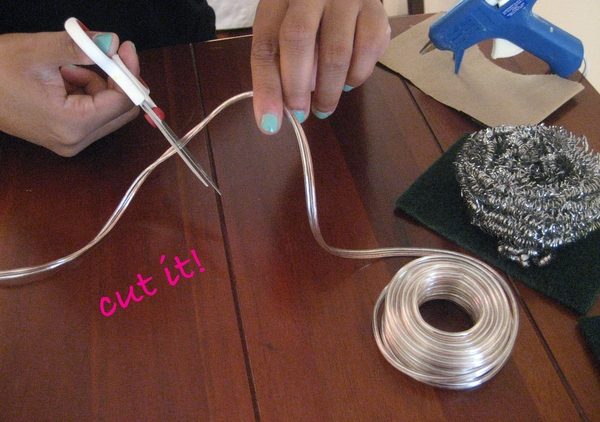 Trim a length of speaker wire. 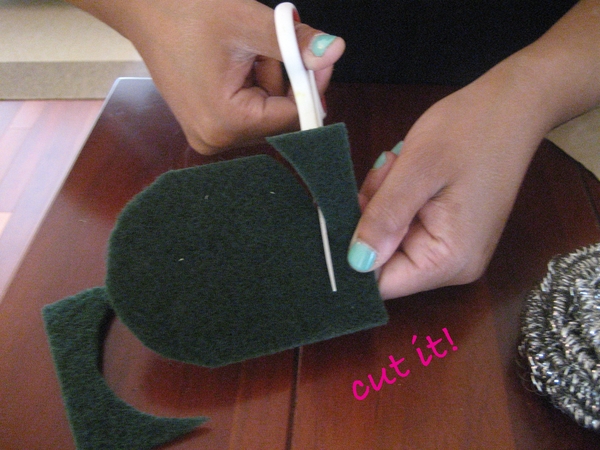 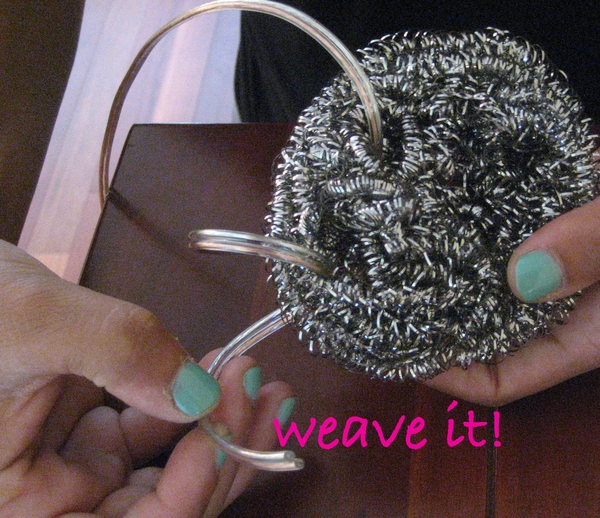 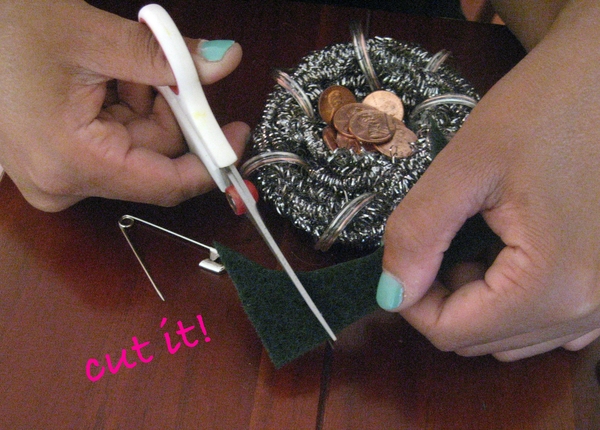 Cut a strip of scrap brillo pad to cover safety pin after it’s attached to the brillo pad backing. 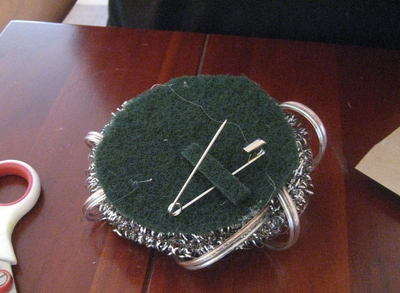 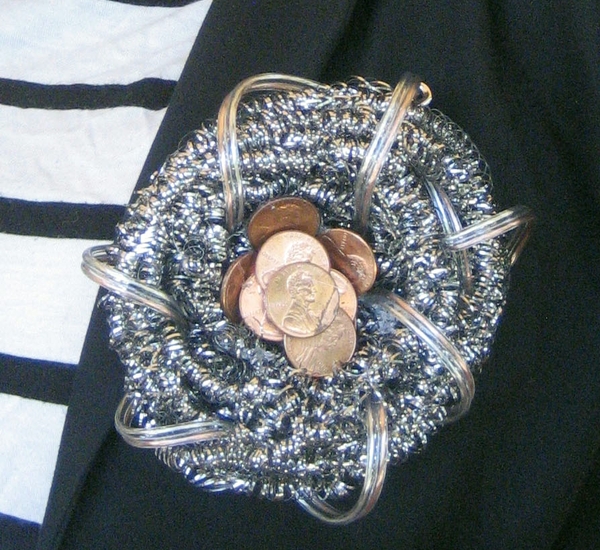 I’m glad I’m not the only one who has been inspired by dish scrubbers!

Coins are inspiring as well, particularly the under-appreciated penny. There’s just something so cool about it. I still love the idea of penny loafers! I had a couple pairs growing up — maybe I should find a big girl version of them to wear today. Well, actually… I did some Polyvore shopping and I found a few coin inspirations of my own. 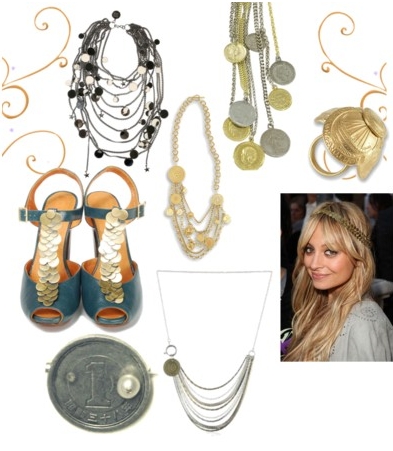 My favorite thing is definitely the shoe–Chie Mihara Ajo Peeptoe for anyone who loves it, too! List price: $420, but $308 on Amazon. Love the color and the cascade of coins! Anyone feel like DIYing that one? 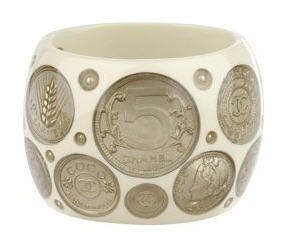 Another cool find in my searching was this Chanel coin cuff bracelet. It was “available in select Chanel Boutiques” which means there was no published price, which means yikes! This looks like a fun DIY project, too. 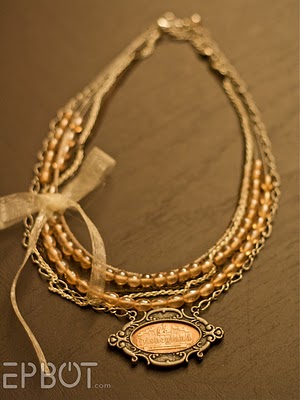 One last coin inspiration I wanted to post about: Jen from EPBOT (the same hilaritarian who writes one of the best humor blogs in the universe, Cake Wrecks) made some ridiculously awesome smashed penny jewelry. I was excited when I saw it a couple weeks ago because I wanted to make some smashed penny jewelry after a trip to our state capital building (in which a penny smashing machine totally stole my last penny), but since the one-crank bandit ate it, I wasn’t able to collect my smashed penny with the state of Oregon on it. A day or two later I saw Jen’s post with these amazing jewelry pieces that incorporated smashed pennies, and I never thought I would have a good opportunity to share them with you, but here it is. Hey Jen, I dig your cool jewelry. Everyone else, she’s just as geeky and crafty as we are! [check out some other great smashed penny jewelry pieces]

I think I’ve provided sufficient coin inspiration for today. Anyone feel like making any of these for me? I’ll post about it and link to you!