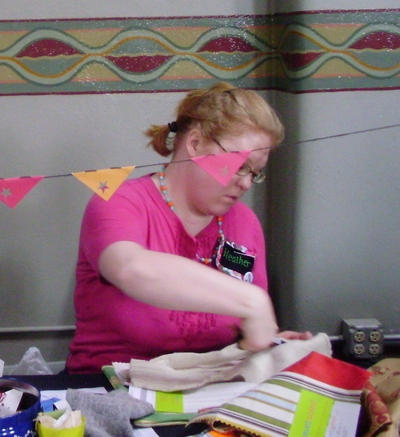 We do a whole lot of craft sharing here at Dollar Store Crafts, and not as much getting to know each other. I am more of a behind-the-scenes kind of person, so I usually don’t put myself out there that much, but it occurred to me that you might want to know a little more about me. A few of you asked me some questions over at the Dollar Store Crafts Facebook page, and I’ll try to answer those soon. If you have any other questions for me, feel free to ask them in the comments here.

Jessica Suarez is a crafty mama-writer over at Crafts for Kidlets who recently engaged me in a cross-blog conversation. She asked me what my favorite crafting tools are.

Well, the number one most important tool is my sewing machine. I know you non-seamsters don’t want to hear that, but the fact is that a sewing machine is pretty easy to learn to use, and is amazing for making crafts of all types. In the photo above, I’m making the upholstery sample backpack, and I sewed it by hand. It took me two hours. If I had sewed it with a sewing machine, I would have been done with it in five minutes. No exaggeration.

You might not have realized how important my sewing machine is to me because I usually avoid posting sewing tutorials. I don’t think of this as a sewing blog, and sewing tutes are among the hardest to write clearly and concisely (which is why I so admire great sewing bloggers like Care from Obsessively Stitching and Dana from Made.)

In case anyone is wondering what kind of sewing machine I have, I JUST upgraded last Christmas (I chose my own Christmas gift!). I used to have my grandma’s old Elna, which was the Cadillac of sewing machines back in the 70s, but it had been harder and harder to keep it maintained and find parts for it. So I opted to get a new Brother sewing machine from Costco. It’s the Brother XR-9000

, and it is computerized and has a built-in font for monogramming, which is awesome. Honestly, though, a sturdy sewing machine that only sews straight and zig-zag stitches would do 95% of what I need (and what most people who use sewing in crafts would need). If you are looking for a sewing machine, ask yourself what you really need in your sewing machine and don’t overbuy, especially if you’re a beginner.

So for Jessica, I know you have two boys. I have three boys, and I want to know what craft projects have been successful with them.

Find out Jessica’s answer at Crafts for Kidlets.

So how about you, dear reader? What are your favorite crafting tools?