We’ve featured broken crayon monograms as teacher gifts before, but middle school and high school teachers are less likely to want gifts made with crayons because they don’t use crayons in their classes. Don’t worry, Cara TX has us covered! She created framed monograms for her middle school son’s teachers using items specific to the subjects they teach. For the computer keyboarding teacher, a monogram made of old computer keys, for the gym teacher, a monogram made from whistles, and for other teachers, monograms made of sharpened pencils. [how to make pencil monograms] [Cara’s Teacher Monograms] [Cara on Pinterest] 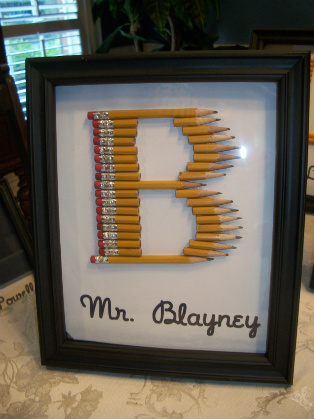