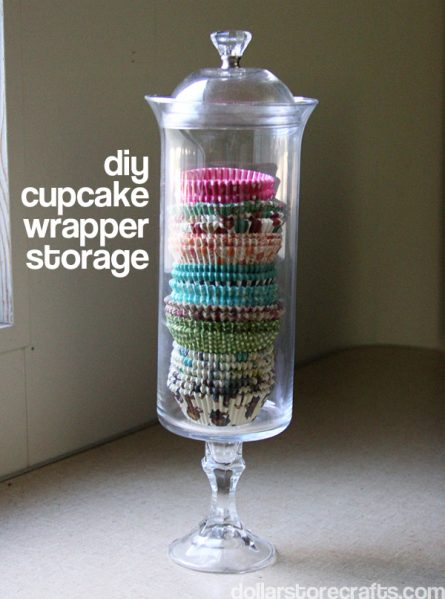 A few weeks ago, I saw a fantastic idea over at TidyMom where she used a tall kitchen storage jar as a pretty way to store cupcake liners. I am a cupcake liner addict, so I have way more than I can use in a year. I loved TidyMom’s solution, and the fact that it put the cupcake liners out on display where they can be seen and enjoyed. A few days later, I had an a-ha moment when I realized that I already have the perfect cupcake display item – the large apothecary jar project I made awhile back using a dollar store vase and candlestick.

Click over to my Apothecary Jar Tutorial to find out how to make it!

And, start storing your cupcake liners in style! I actually have mine sitting on my desk right next to my computer, and they make me feel happy every time I see them out on display.