Reader Rosi wrote: “I found your site yesterday and already can’t wait to make the apothecary jars–I will be using them as centerpieces for my daughter’s quicenañera in September, but I am having problems thinking up ideas for the party! Please help? I have 30 tables to make centerpieces for and most of these go home with guests so I’m not too keep on spending a lot of money on these, BUT I want them to look fab!”

Since I don’t know your colors or if there is a theme, I am just gonna throw a few cute ideas out there. Our readers will chime in with ideas in the comments, too! 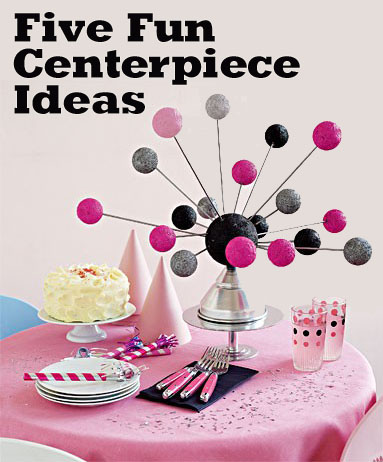 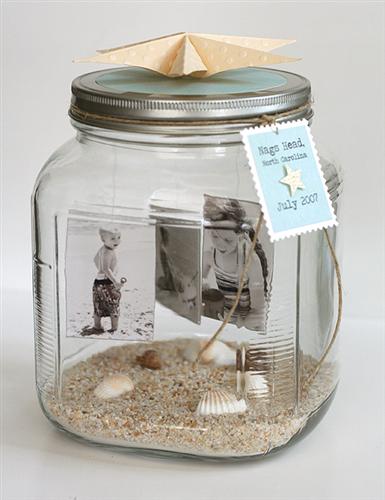 I love this personalized photo jar centerpiece idea because you can use photos of the birthday girl, along with some jar filler that goes with the party color scheme or contains some of the birthday girl’s favorite things in it. You can substitute an apothecary jar for a lidded jar and make a similar statement. [project by Lisa Storms at Fiskarscrafts]

I think candy is a perfect centerpiece because it’s bright, colorful, and fun, and it keeps the decor light and whimsical, which is perfect for a 15 year-old girl. Guests can snack on the candy when they’re at the party, and you will be glad that someone took it away at the end of the party. [project by Jill at Meet the Dubiens] 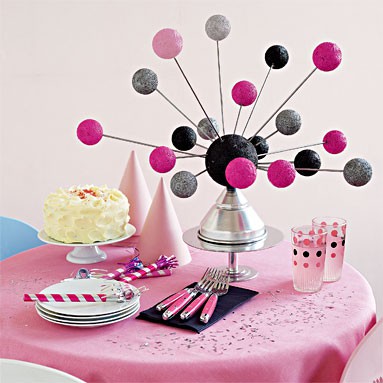 This 50s-inspired atomic starburst centerpiece is so much fun for a sweet birthday party. I even love the color scheme — pink, black, and silver. You can find bags of foam balls at the dollar store, and make your own small cake stand from a plate, a candlestick, and some E-6000 glue. Maybe you could tweak your original idea and make the cake stand instead of an apothecary jar. The base of this starburst is a silver funnel! A commenter on Pinterest suggested that instead of foam balls, you could put cake pops into the center foam ball, which would be even more sweet because then your guests could eat the centerpiece. I guess I’m just stuck on the idea of eating the centerpiece! [idea by Derek McLane for Rachael Ray] 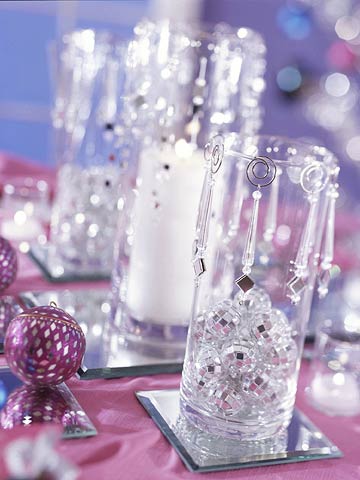 Combine a few mirrored candle stands (you can find these at the dollar store) with an apothecary jar and a couple of cylindrical vases. Embellish with mirrored ornaments and multiply the sparkle! To bring costs down, how about spray painting rattan balls from the dollar store in a metallic silver? [project by BHG]

This number vignette features assorted items (and the number 5) under a glass cloche on a silver platter. Since you are making apothecary jars, just fill the jars with a collection of favorite items, or items that go with the theme, or the number 15. [project by Cottage Affairs]

What are YOUR ideas for a great quinceanara decoration?