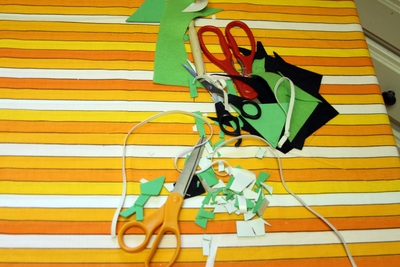 This fall, Dollar Store Crafts will be celebrating its second birthday. It’s hard to believe that this site has only been around for two years. We’ve posted over 800 posts in the last two years (most of which have been written personally by me, Heather). During the past week, I’ve been having a cross-blog conversation with Jessica at Crafts for Kidlets. We’ve talked about what our favorite crafting tools are, what crafts our boys like, what has inspired us, and favorite things about writing our blogs. Today, Jessica asked me the last question of the series, which is:

Where do you think Dollar Store Crafts will be in five years? Will you still be writing it? More often, less often, more guest posts, etc.

I have lots of plans for Dollar Store Crafts. In the past two years, we’ve seen steady growth and have grown to be one of the larger craft blogs on the internet. We reach over 100,000 individuals a month, and have a good sized Facebook fan page, weekly email newsletter, and Twitter account. Most of this has just been because I love crafting, writing, and hanging out on social media. For the first year, my only goal was to post about projects that used dollar store ingredients every day.

It’s funny you ask this question because just last week, I invited Rhonda to join the Dollar Store Crafts team as my first high-volume regular contributor. Rhonda has been writing about dollar store crafts for the Grand Rapids Examiner for awhile now, and has posted lots of cool projects and tutorials there. She’s posting 3-5 posts a week and doing other fun stuff for Dollar Store Crafts. Care Sanchez from Obsessively Stitching has also been a regular contributor, posting 2-4 projects per month for the past year. In the next few months, I will probably add one or two more people to the team.

Last week, I formed an LLC to make Dollar Store Crafts “legit.” Yay, go Dollar Media LLC! In the past couple weeks, I started a Dollar Store Crafts YouTube channel so we could start making Dollar Store Crafts videos. We’re working on a new logo (yes, the old one is soooo 1995… and I have even worked as a graphic designer before, but it’s true that sometimes your own stuff just doesn’t get the attention it deserves), and a new site design.

In short, I am excited about all kinds of upcoming things for Dollar Store Crafts. In five years, I hope I am able to bring in enough money with the site to bring you much better features (more tutorials, more videos, more fun site features), and have a couple other sister sites as well. And maybe I’ll organize a US tour. Coming soon to a city near you, dollar store crafting party!

And in 20 years? Well, SOMEONE has to replace Martha Stewart in the hearts of crafters across the globe, right? :)

Thanks for the cross-blog conversation, Jessica. It’s been fun to answer these questions, and get to know a little more about you too!

*That photo at the top of the page is what happens when you do a craft project with your four year-old. I like to call it “craftermath.”