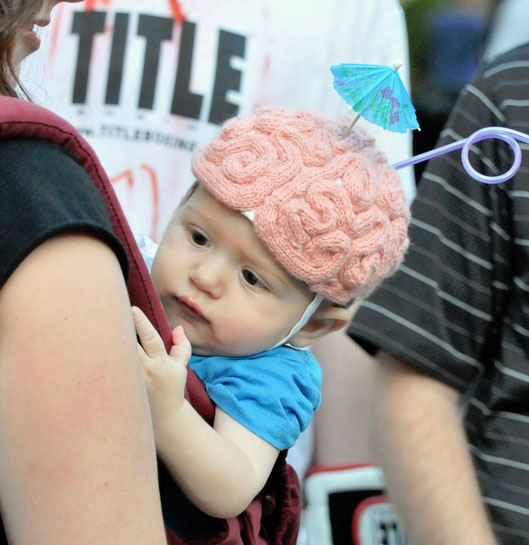 My son has come up with the crazy idea of doing a zombie birthday party…He is going to be 5 so nothing too creepy but I can’t seem to find much. Anyone have any ideas?

My first question was “Does your son like Plants vs. Zombies?” because PvZ is a super-cute game that is (mostly) not too creepy for kids. Kristina’s answer was no, so read on for my recommendations and then please post your own ideas!

Because your son is only turning 5, I would let him know it’s a zombie party but keep the theme less obvious to outsiders (like parents of other five year-olds!). Some parents won’t be happy with sending their kindergarteners to an undead-themed birthday party! Too many awkward questions, y’know?

Zombie Walk: That said, it could be fun to have a zombie walk (you could call it a monster walk). Have kids dress in raggedy clothes, paint their faces white or grey, and then video them walking down your neighborhood street slow and jerky-like. The more game-like you make the event (and instructions), the better. After the walk, cue the video up right away so kids can watch themselves on TV. 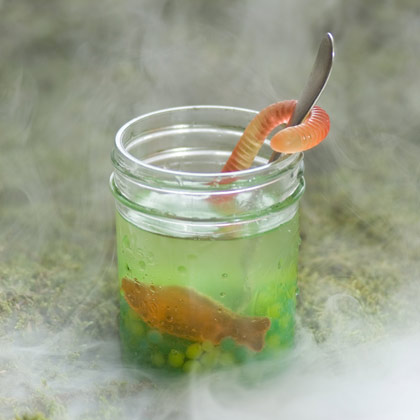 I love the creepy yet cute look of this swamp juice, and it would work well with a zombie-themed party. I love the orange and green color scheme too! 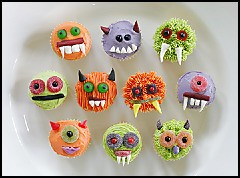 Sadly, the Rocky Mountain News is no more, and the recipe for these adorable zombie zoo cupcakes is gone along with the newspaper and most of its online archive.

The good news is these cute zombie cupcakes look fairly simple: frost cupcakes in orange, green, and purple, and add candy features and frosting details. Buy premade frosting in tubes for the detail work. You could even let kiddos decorate their own monster/zombie face cupcakes. Kids LOVE decorating cupcakes! 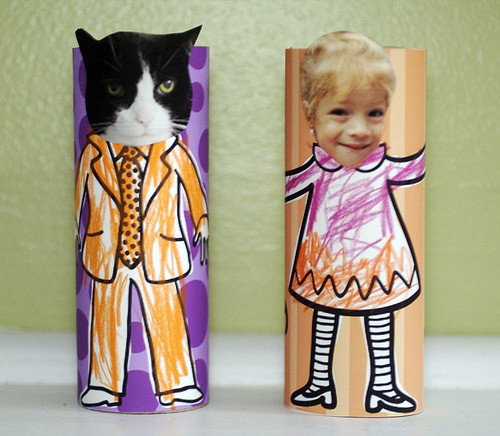 Okay, this isn’t terribly zombie-ish, but it’s so cute and it would be a great party activity. Use cardboard tubes (like paper towel rolls) to create these cute little color-and-cut action figures. Snap a picture of the kiddos at the beginning of the party and print their faces out on your printer before the craft begins. If that’s too much pressure for you (it is for me during a party!), maybe have some pre-cut heads from magazines that they can choose from.

If you don’t have paper towel rolls, you can just roll card stock or recycled cardboard into tubes and tape them. They’ll work just as well! 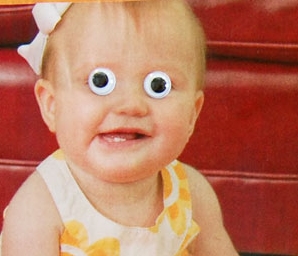 I love this idea! Just glue googly eyes over the eyes from any picture in a magazine. This could provide hours of entertainment for the right kid (or, ahem, adult).

Baby Brain Hat photo at the top: licensed from cory.cousins on Flickr. There are no instructions for making the baby brain hat, but if you know how to knit i-cord (or use a knitting loom), you can knit yourself a whole lot of pink i-cord and attach it to a ready-made hat for a funny brain hat.

Okay, everyone! Now it’s your turn! Give us some great ideas for a zombie-themed birthday party that is kid-friendly!