2011 was a tutorial-filled year at Dollar Store Crafts; we brought you more original tutorials than ever!  There were fashion tutorials, home decor tutorials, recycled crafts, and all kinds of other ideas.  Some of them were particularly popular, so to wrap up the year, we thought we would take a look back at our top 10 tutorials out of everything we made in 2011.  Which of our tutorials was your favorite this year?

Okay, I admit it, I have a yarn hoarding problem.  In the spirit of stashbusting, I came up with a way to use a bunch of my random odds and ends and tidbits that were too long to throw away, but too small for a whole project.  It’s the perfect crochet project for people who don’t know how to crochet.  Don’t be afraid, it’s super-duper simple, I promise!  [read the tutorial] 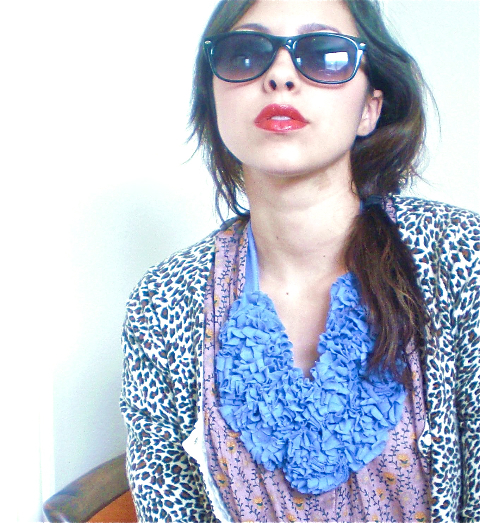 We’re big fans of the talented siblings from The Sisters 4 Say More is More.  They’ve contributed some wonderful ideas to our site, including this recycled T-shirt bib necklace by Sophie, aka Sister #2.  It’s frilly and girly and makes a big statement, and we’re glad you love it as much as we do!  [read the tutorial] 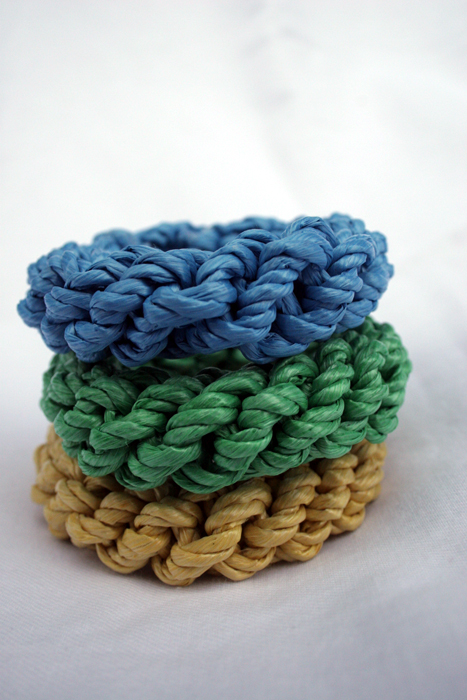 Our fashionable contributor Samantha (also of Bromeliad Living) got the idea for these chunky, colorful bangles when she saw a similar design in a magazine.  She got her macrame on and came up with her own take on the look.  The designer version cost $50 each; these cost more like 50 cents each!  [read the tutorial] 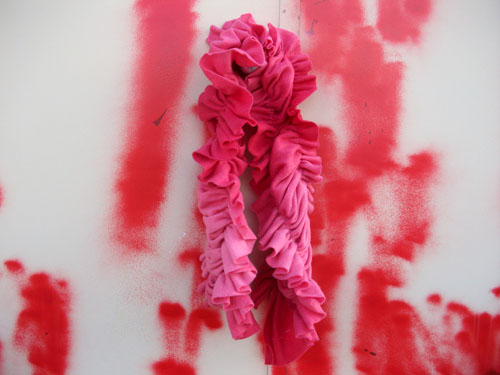 Are you noticing a trend on this list yet?  2011 was certainly a good year for DIY fashion!  This Anthro-inspired scarf is another post from Samantha, who adapted the look of a lighter-weight scarf to be cozy enough for winter use.  Even if you think you have zip-zero-zilch for sewing skills, you can pull this one off like a pro.  It’s that easy!  [read the tutorial] 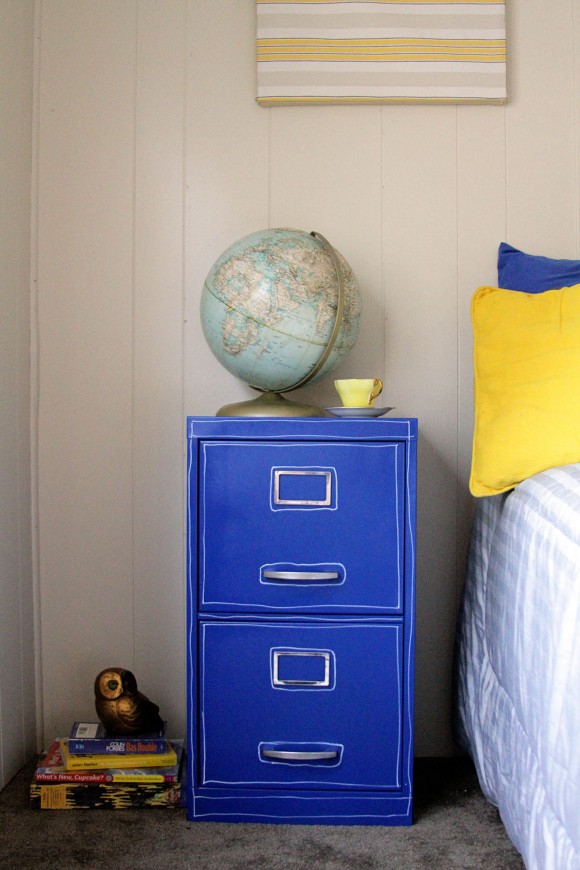 Heather picked up a tired old filing cabinet as a Craigslist freebie.  It was in good shape, but it was bland and boring.  But not anymore!  She went for a cartoony, blueprint-like look, with fabulously whimsical results.  It’s playful enough for a kids room, but also works in a grownup space that needs an injection of humor.  [read the tutorial] 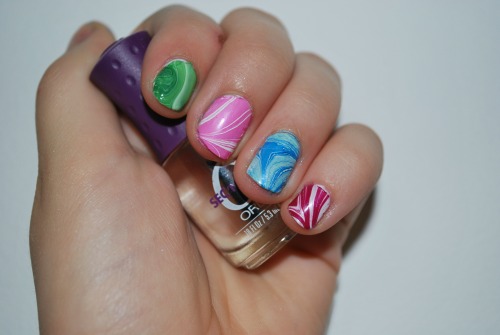 We hosted a series of nail polish tutorials from Megan at Razberriez, including these fabulous (and surprisingly easy) marbled nails using a water technique.  We thought it was awesome and so did you, sending it all the way to the top five tutorials of the year.  [read the tutorial] 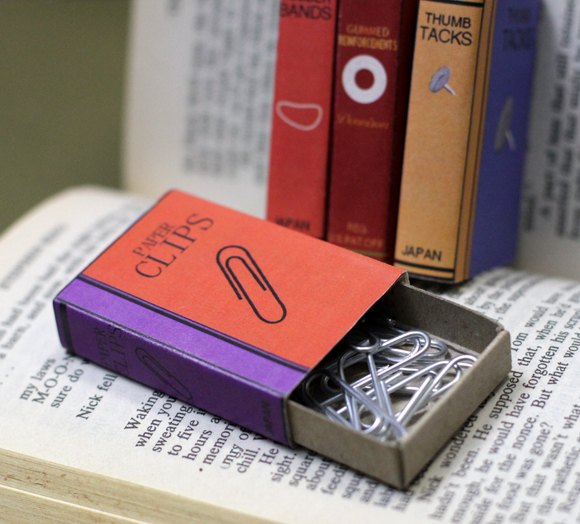 We went mini-crazy earlier this year.  For those of you who reveled in those weeks, there are more tiny things in the future.  Looking back at the last wave of itty-bitty creations, the most popular by far were Heather’s miniature book covers made to fit over matchboxes, turning them into office supply holders.  She even put together a free printable so that you can whip out a set of your own in no time!  [read the tutorial] 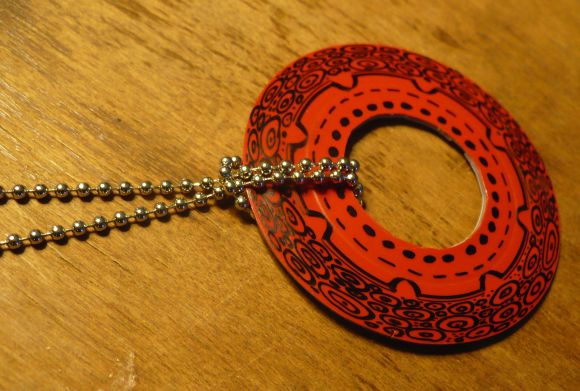 The day that someone told me you could use #6 plastic like Shrinky Dinks, it was a life-changing revelation.  Okay, maybe not life-changing, but it certainly did change my sorting of recyclables.  I knew there had to be something nifty I could do with some red plastic cups left after a party, so I played around with my Sharpie and some scissors and came up with this design.  No one will ever guess that it started out as a plastic cup!  [read the tutorial] 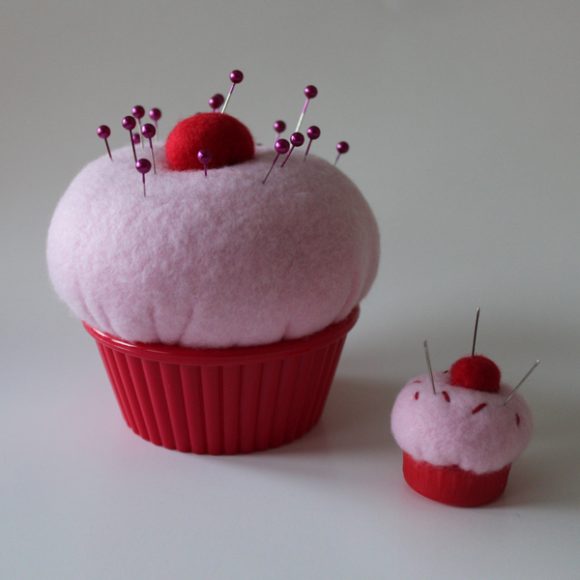 Our pal Care from Obsessively Stitching is always coming up with adorable ideas.  She used a dollar store ramekin as the base for making a sweet little cupcake pin cushion, and even made a miniature version that you can wear as a ring to keep pins close at hand while you’re fitting your next project.  Can you guess what the mini version is made from?  [read the tutorial] 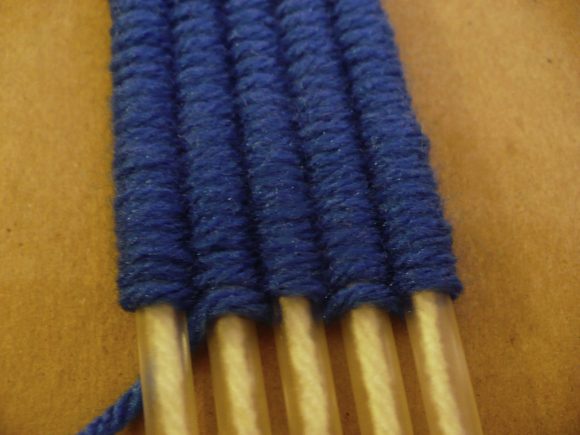 I was a band camp kid.  (Once a geek, always a geek!)  Actually, the camp I went to was a fine arts camp, with kids majoring in all kinds of music and dance and visual arts.  You could even take elective classes, and one summer I spent my spare time for two weeks of camp studying fiber arts.  It was an experience that would heavily influence y future crafting!  One of the projects I remember doing was making a weaving loom out of drinking straws.  Feeling nostalgic, I grabbed a few straws and did a little old-school crafting.  I never expected my trip down memory lane to be so popular!  [read the tutorial]